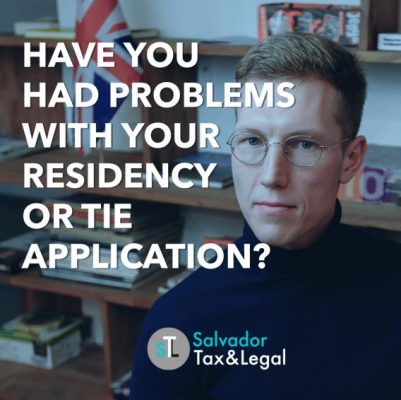 HAVE YOU HAD PROBLEMS WITH YOUR RESIDENCY OR TIE APPLICATION? IF IT WAS REJECTED, YOU HAVE TO KNOW According the DIRECTIVE 2004/38/EC OF THE EUROPEAN PARLIAMENT AND OF THE COUNCIL of 29 April 2004: “The fundamental and personal right of residence in another Member State is conferred directly on Union citizens by the Treaty and is not dependent upon their having fulfilled administrative procedures”. Additionally, the BREXIT AGREEMENT (Agreement on the withdrawal of the United Kingdom of Great Britain and Northern Ireland from the European Union and the European Atomic Energy Community, 2019/C 384 I/01), establish that the exercise of the right of residence means that an EU citizen or a UK national lawfully resides in the host State in accordance with Union free movement law before the end of the transition period. This means that all EU rights will be kept for British citizens until 31 December 2020 as if UK was EU member state. All possible situations where the right of residence stems from Union free movement rules are covered. It is sufficient that the right of residence was exercised in accordance with the conditions Union law attaches to the right of residence. In SALVADOR TAX AND LEGAL we are giving advice in the application of residency document in accordance to the BREXIT Agreement and also in the case of rejected applications. It is recommended to check if resolutions are done under the law (EU and Spanish law). If you have any doubt or you are in the case of a rejected residency application, you could contact us and our solicitors could give you advice about you case.

The latest on residencia

What about if I travel with pets?

11/01/2021
We use cookies on our website to give you the most relevant experience by remembering your preferences and repeat visits. By clicking “Accept All”, you consent to the use of ALL the cookies. However, you may visit "Cookie Settings" to provide a controlled consent.
Cookie SettingsAccept All
Manage consent

This website uses cookies to improve your experience while you navigate through the website. Out of these, the cookies that are categorized as necessary are stored on your browser as they are essential for the working of basic functionalities of the website. We also use third-party cookies that help us analyze and understand how you use this website. These cookies will be stored in your browser only with your consent. You also have the option to opt-out of these cookies. But opting out of some of these cookies may affect your browsing experience.
SAVE & ACCEPT